No Man Can Take These Colors and Live Flags were a vital part of the Civil War battlefield.  They guided soldiers into and through a battle, and identified other groups of men as friend or foe.  Commanders used them to help know what was going on in the disorder and chaos of the field.

Loss of a flag might mean troop confusion, and lead to disaster. A unit’s flag was a source of pride, and its capture could lower morale or bring shame.  In fact, the Union issued many medals for capturing an enemy flag, or saving their own.

It is no wonder men valued them so much, and still do today.

A unit’s flag, or “colors,” was the responsibility of a Color Guard.  This was typically a squad of eight corporals and a color sergeant.  In battle these men took up formation in front of and alongside of the flag.  If the color bearer himself was hit, another member took up the flag.

As you can imagine, the color bearer was a tempting target.  This was certainly the case when the 26th North Carolina Regiment was ordered forward at Gettysburg.  Within ten minutes nine men went down carrying the battle flag, men we know the names of to this day.  A tenth man, unnamed, took it up and kept moving.  The entire color guard was lost, but another soldier had stepped up as the regiment raced on.

In the words of the Union colonel of the opposing 24th Michigan “Iron Brigade,” the Southerners “came on with rapid strides, yelling like demons” as they swept into the Union lines.  The battle raged, and Lieutenant Blair of the 26th saw the flag was again on the ground.  Knowing how many had been lost carrying it, he exclaimed, “no man can take those colors and live.” Regardless, Lt. Colonel Lane, now commanding the 26th, picked up the flag and yelled, “twenty-sixth, follow me.”  Lane became the 14th man to fall that day while carrying the flag.  (Lane recovered and returned to command the 26th until the end of the war, though not without sustaining several more serious wounds).

A battle flag represented the ideals of the men who followed it into the fire and hell of combat.   Memories of struggle, loss, and glory were sealed into the very fabric of a unit’s flag.  Whether of humble thread and origin, or of the finest silk and carefully sewn, war is hard on a flag.  A Union Officer had this to say after seeing some Confederate battle flags from Pickett’s charge at Gettysburg:

These ‘Rebel’ flags were mostly homemade affairs…. Torn by battle, dirty, and cheap looking, no wonder our boys designated them ‘rebel rags.’ 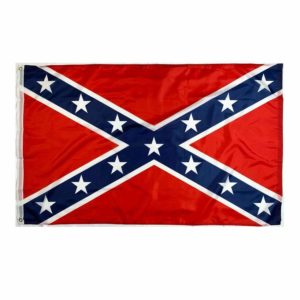 Though scorned by this man, those “rebel rags” had a value to the Southern soldier that is hard to put into words.  We Americans are rightly proud of our Stars and Stripes, and the sight of it flying can make us stand tall, but few of us revere the early flags of the United States as so many Southerners today honor the Southern cross of the Confederacy.  All these years later it can still represent the tough, persistent and, yes,  sometimes rebellious character of the Southern man and woman. 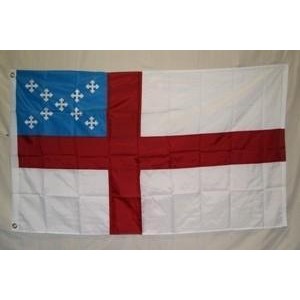 The words of one man describe well the meaning of this flag to those who served under it.  Randolph Harrison McKim enlisted as a Confederate private, and rose to be a lieutenant and a chaplain in that army.  After the war he served for 32 years as the pastor of the Episcopal Church of the Epiphany in Washington, D.C.  This is from a speech he gave to the United Confederate Veterans at their 1904 reunion in Nashville, Tennessee:

This is now for us an indissoluble Union of indestructible States. We are loyal to that starry banner…And yet, to-day, while that banner of the Union floats over us, we bring the offering of our love and loyalty to the memory of the flag of the Southern Confederacy.

More than 100 years later these words still ring true for many.  Most have cast off certain values that gripped so many in both North and South of the nineteenth century.   But other timeless virtues are still embodied in the men and women of the South, and for many them this flag is a symbol of that spirit.

What does the Confederate flag mean to you? Tell us in the comments below.  Thanks for reading. If you enjoyed this post, please share with friends/family on social media. Brought to you by: Ultimate Flags